Nuclear Waste and the Ice Age

I've noticed there's a big bru-ha-ha over where the deep used fuel repository will be. The pushers are saying: "No, no, we won't offend anybody.". New Brunswick is tearing itself apart, on whether it's a nuclear province or not. They probably want to do the 'Los Vegas', take all the cream, and none of the responsibility. Some people seem to be more reasonable.

But is any site really available in NB? Although everybody is calling me a failure, I will stick to the rational approach, and assume that something has to be physically possible, in order to be built. Of course, in Canada, we have the Niagara Tunnel Fiasco to prove me wrong on that. The political power people will try anything once, or maybe twice.... or more than that. 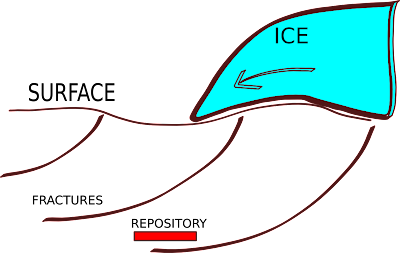 Nearly all of Canada has been glaciated many times in the past. A lot of areas have been scraped right down to the bone, by which I mean the basement granites. I emphasize once again, that no repository can be built in these zones, even though they are probably better than the swiss cheese rock they want to use at Bruce.

I did a study on the terrible things that happen to rock when an ice front either advances or retreats. If it's just standing there, nothing happens. During a sharp advance, there is an ice front, which causes shear loading on the rock. Behind the ice front the water may be liquid at the bottom and ice injected into the rock at high pressure.

The combination of the two create horizontal fracture zones, that are quite open, and carry enough water for a river. These things go down to about a kilometre in depth, and are not nice places to keep high level waste. You could try to seal them with grout, but that would be a useless effort.

Of course, I don't know why I mention these things. They can be denied on the political podium, and every small town deserves its chance for economic prosperity. But it's something for the rest of us to look out for.
Posted by Harold Asmis at 4:26 PM