Niagara Tunnel Skids Under the Sandstone 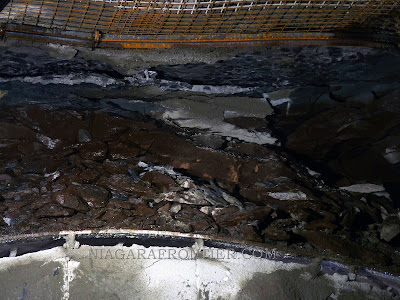 This is really neat from a rock mechanics viewpoint! The TBM is inching up to the Whirlpool Sandstone, and the rock underneath is still being ground to ratshit. They really need a scale for this photo, but I take it that the overbreak is now under 2 m, but it may be a higher volume, since it would tend to spread out more. The speed is now getting up a bit.

Now, we know from the old tunnels that the sandstone is a really good roof, if you leave it flat and undisturbed. But they are going to chew a circular cross-section halfway into it. What will that stress concentration do? Will the sandstone explode? What if they broke right through it? Would the convergence ever settle?

I don't think they'll ever write the book on this, since everybody is going to hunker down under the Cloak of Stupidity, in order to protect themselves. Still, it is interesting... 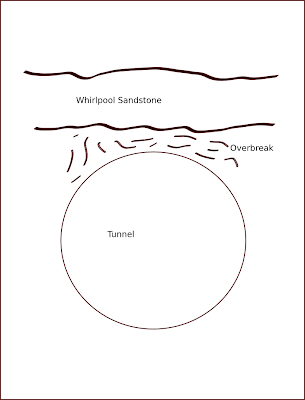 As the tunnel approaches the sandstone, the overbreak may decrease in height, but increase in volume, due to the general tendency to form a flat roof.
Posted by Harold Asmis at 11:27 AM