I just dipped into this the other day. Seems this is as 'hot' as it gets in geology-land, almost as big as the dinosaur killer thing!

I've always loved hotspots. They were right there from the beginning of plate tectonic theory, and the great Tuzo Wilson, whom I had the pleasure of meeting personally, made great use of them.

In my early days, hotspots were made out to be great magical things that shot out from the deep mantle, and stayed absolutely stationary with respect to the inner earth. Of course, the plates slooshed all over the goopy layer, but the hotspots stayed resolute and pure. The plates slid over these markers, and showed the absolute motion of the plates. The Hawaian chain is an example of this. 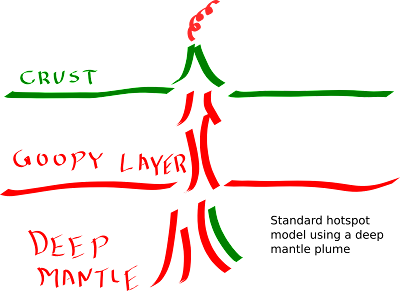 I was an 'absolute' believer in this theory, since it was like the thermal 'Fist of God'.

Unfortunately for us supporters of 'Spiritual Purity in Plate Tectonics', there wasn't a shred of evidence for this theory. And over the years, the nasty reality of Science has chipped away at the stone edifice. There's no chemistry to prove it, no deep seismic scans, no nothing.

Alack a day! What to do, what to do? Well, ditch this old crap and go on to something new! It has been noticed that hotspots are born, have some fun, and die. As well, they have never scanned lower than the goopy layer. They stay in one place more than the plates, but they do move around.

This gives rise to the 'new' theory: that they are not 'magical' at all! They are a consequence of everyday old plate tectonics! 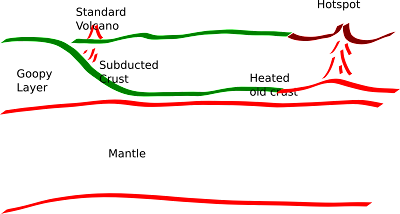 Seems when the old oceanic crust subducts, as over in Vancouver, there are some wild-blasty volcanoes (like Chaiten), that live off the cooked water from the dessicating crust. And so that old dry crust has been ignored and forgotten. But it bites back! Seems all this old crust hangs around at the bottom and cooks, and melts, like chocolate. When there is a whole giant pool of it all hot and bubbly, it bursts out. Normally, this process can be activated by some sort of tension, such as plate separation, or continental drift.

The sub-continent of India really opened one up, which became the Deccan Traps, and the same for Yellowstone. If these things open up under a continent, all hell breaks loose, as the continental rocks are cooked and explode out with world-wide, extinction-type consequences. Believe me, we don't want this happening before the Sun blows up!

Once started, the hotspot sticks around for quite a while and the plates ride over them. This happened in Quebec with the formation of Mount Royal, and the whole line of similar mountains, down to Boston, and out into the sea.
Posted by Harold Asmis at 7:32 PM

Care to be a bit more specific with a reference?

The bottom of your gloopy layer is only ~220km.

There is plenty of evidence that subducted plates at least reach the upper/lower mantle interface at 660km (purely on earthquake hypocentres) and have been imaged down to 2000km using mantle tomography. They probably reach D" at 2900km.

The Wiki article on the real name for the goop (I always misspell it!), has it generally ending at 200 km, but can go as deep as 400 km. Mantleplumes has some great articles by Anderson, but they are hidden in the world's worst web site! There's no way the oceanic crust can plunge that deep!