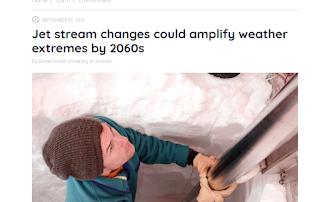 This is one of those articles straight from the Dickens 'Office of Circumlocution' .  It shows that over the centuries the Jet Stream has had huge variations, but now it will be dominated by carbon dioxide.

The reconstructions suggest that natural variability has thus far masked the effect of human-caused warming on mid-latitude atmospheric dynamics across annual and longer timescales.

However, in order to get published, they go on and on about how carbon dioxide will go over natural variability by 2060.  That is just stated on 'faith' and has nothing to do with their research.

Of course, if natural variability has been so huge so far, then the rise in global temperatures that is the cornerstone of the fanatics (CARBON GOES UP, TEMPERATURES GO UP!  END OF STORY!), then it throws everything in doubt.  That was what fanatic yelled at me (in text).

There have been lots of these 'apology papers' in the past few years.  Yeah!

ps.  An apology paper states 'We are sorry that our research blows the carbon hypothesis out of the water', but we can't say that or we'll suffer the fate of those NASA lab guys'.  Much ink was spilled saying that the recent warming spell was 'beyond natural variability'.

pps.  note that they put the date for climate philosophy at 'infinity and beyond'