Note the question mark.  That's a common trick in headlines to strongly imply something, yet releases all the nasties.

Of course this will be denied, but wow, all the ducks line up and are quacking. 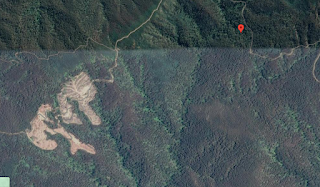 If you zoom into that big industrial area, they are rigs.  The location isn't that accurate, because, who the heck cares about seismometers?

And now, the earthquake stats. 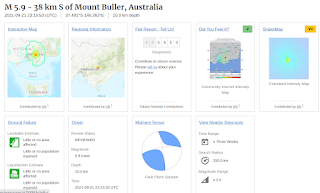 This is the exact same mechanism as Oklahoma.  Neat.  If they had seismometers, they would find the secondary earthquake lines up, and has the same mechanism.  That's a hallmark of fluid motion.

Australia has gone nuts for coal-seam fracking.  They have cold winters, and just had a really cold one.

As a disclaimer -- This is nothing like Oklahoma, because it is in Australia.  Any social media person would know that.

ps.  this is exciting, because I consider Australia to be a tinier bit smarter than oky-doky land.  And they don't have the totally incomp usgis.  This is how the oak zone started with a big M6, then it built up to produce an M7, which didn't happen because gas dropped its price.  If aust follows oak then there will endless denials, stupidities, etc.  They could just pay me a lot of money to solve it, but I am tarred with denier juice, and can't debate, with cbc people, worth a fig.  Too bad.

pps. now, if reporters interviewed the rig farm, they would find those guys heard earthquake noise, and felt a jump.  Not going to happen.