We are getting straight-through Pacific air now, but Ottawa is a bit out of it.  So there is lots of snow for me up here right now. 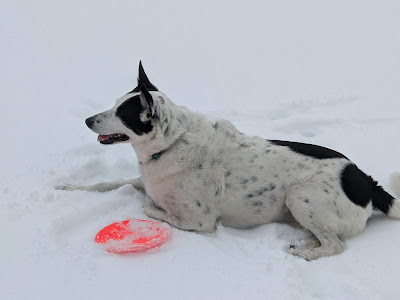 The dog is having fun.  I just got the tide gauge data and it's up a bit.  That will mean the global temps are also up a bit, but I only get that on the 11th.  The guy doing the world ocean currents is on a vacation, but it still looks like there is a huge Pacific current going under the North Pole.  A very complex winter.

We need a high plume on the Pacific to gouge out some bitterly cold northern air.  That sends down an Alberta Clipper.  The scientific papers now agree on this mechanism so there is no more 'Polar Vortex', I hope.

The picture is done with the Pixel 4 zoom, so that is a great thing.

ps.  just cut myself opening a Costco blister pack.  It was poles for the brother-in-law and it was on the table for 2 days because nobody wanted to open it.  I have a thing at home for this, but it wasn't here.  It was taking 10 minutes because I didn't want to cut myself on the plastic.  Finally gouged my hand.  These things are a consumer hazard!  No more Costco stuff.  Ammie from now on.