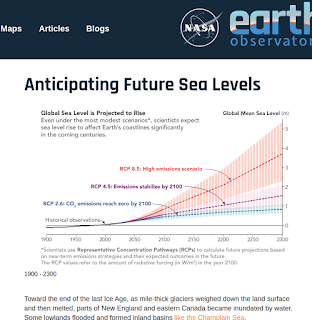 The article gives the example of the end of glaciation, and how the sea levels rose when the continental glaciers rose.  They are confusing the general isostatic depression of the land and actual sea level rise.  In fact, they totally ignore the fact that land everywhere goes up and down like a toilet seat, thus the focus on river deltas.

Now, a sister agency that cannot be named, is getting really slack on processing sea level measurements that show that sea level is sinking because the Pacific Ocean is colder than .. whatever.

They are going to use a satellite for sea level measurements that is only accurate to a few inches.  Not going to cut it.  We have the actual ground measurements, which are no longer available in a timely manner.  I will never consider 'conspiracy theory' when good old incompetence will explain things, but this might be pushing things.

Since, apparently, I'm the only one in the world to complain about these things to noah, I will have to assume that all the physics measurements will disappear in the future.  Only those things that look for what they expect to find will be available, such as co2 and methane measurements.  It's not the Scientific Method when you tailor everything to find what your philosophy tells you is true.

So, the world is getting colder and colder, and the sea level is sinking because of simple water thermal contraction.  However, we'll be told the exact opposite, in any way they think the public will swallow, thus clange is everything and causes everything.

ps.  I'm going to spell it Clange, to show the long vowel.

pps. and the philosophical nature of the definition.  Precision is colonial and racist.

more - and the WSJ is hyphenating, and mentioning that nobody wants to pay for greta-wishes.