Although the world is getting colder, we are having a weird blip of warmth.

In the Pacific, the main cause of this blip is probably a short-term northern reversal.  This is like an El Nino, and might be a rebound, or the famous El Nina.  There are no signs of an El Nino, which is the only cause I have found so far for a major global temp rise.


The Arctic ice freeze is taken a weird curve away from the main curves.  We don't have much history on this, so who knows if it has happened before?  Unprecedented!  :) 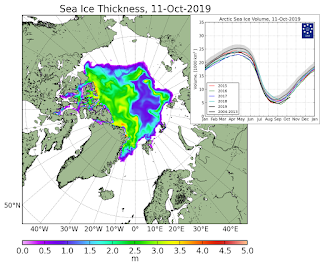 You would expect that to go back to the fold sooner or later.

The Arctic warmth is being driven by a weird plume pattern that bypasses UK and goes straight up Russia.  These patterns can hold for a month or two.

That describes their summer, as well.

ps.  the Arctic ice volume is finally showing the expected turn up.