I thought I might as well do these again.  Not much has been happening.  Remember, a single one of these reports doesn't do much.  What you want is to see the patterns shifting.  The past exciting stuff was the big reversal of the 2016 El Nino, and the cessation of both the Gulf Stream and Northern Pacific current.  Now, that was something.


This is the Atlantic, and it shows, once again, that there is a big hunk of heat going south this year.


The Arctic current is really picking up, and it's from the freezing of the ice cap, and not the melting of Greenland.

Finally, the reversal in the Pacific, which seems to have given us a post- El Nino rise in temps, looks like it is getting beaten back.


All is right again with the Arctic ice, as the weird distortion is curving back to join its buddy-lines. 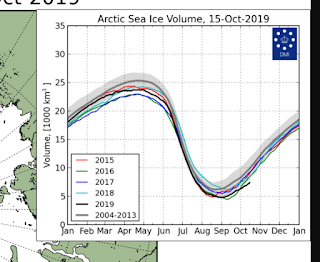 I am expecting that the global temps curve will go back to sinking again, after these little blurps.  Physics always wins in the end.  :)

ps. and the UK is leading the fun.

What will the University of Leeds have to say about this?