Steel Roofs No Good for the Upcoming Canadian Ice Age* 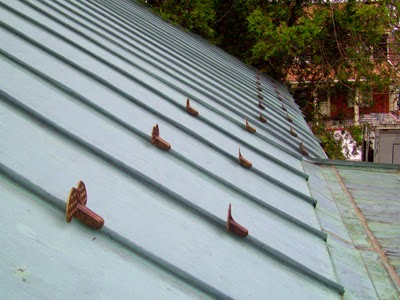 I had my favourite contractor in to look at the ripped out vinyl piece.  I was panicking that the whole thing was rotten after 15 years, but it was extremely cold and windy, so I think a frozen goose hit it.  :)  The rest looks good, and I found a lot of replacement pieces under the crawl space.  My roof needs replacing, it's heavy shingle that has lasted over 20 years, and he was shocked, since the average roof lasts 12 years or so.

So I was thinking steel, and he said they are taking them down.  When they just nail them over an existing roof, they don't fix the venting and such.  As well, those cute snow stops are useless in Canada, once the snow is higher than them.

I was thinking of that as a geotechnical engineer; the snow stops create a uniform discontinuity for sliding.  So you can have a heck of an avalanche.  People with the steel roofs are afraid to leave their house.

The asphalt-gravel top roof offers uniform friction.  Once again, the whole thing is about fractal roughness, like earthquakes, and the difference between Oklahoma and Arkansas.  :)