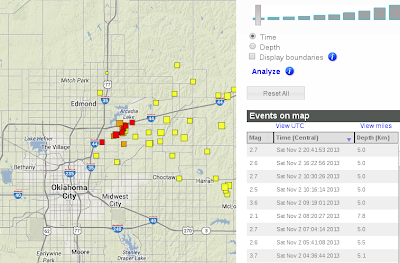 I don't know how much we can rely on their locations, but it is a NE spread, probably along the top of the megathrust, just like the situation at Hamilton.  I really don't expect much to happen in this scenario, although it must be keeping people up.  I was hoping to see a NW trend, which would be really dangerous.  Keep on injecting!

Update:  OK survey indicates more earthquakes but not on this plot for some reason.

Holland with the Oklahoma Geological Survey says in the last four years, Oklahoma has been averaging about 100 magnitude-3 earthquakes every year. Holland says it's difficult to determine exactly why, but says Oklahoma has numerous fault lines and the state was once a plate boundary.

This is the first indication of acknowledging Precambrian structure, and they have been reading my stuff!  :)
Posted by Harold Asmis at 7:06 AM