Chicago Earthquake - When is a blast not a blast?

Rotten seismic instrumentation has led to great confusion.  On one hand the USGS says it is a single blast, but they can't even locate it right.  This led to people blaming one quarry, when it was another.  The area is thick with quarries.  Also, it was first reported by some as a 3.8, now a 3.2.

Inspectors are crawling all over the place, but what can they tell?  Suppose, the drunken blaster loaded the crap out of the holes, 'just to make sure'.  Could you really tell without good instruments?  Now, it's just a bloody hole in the ground.

The second 'magical' explanation, is that it triggered an earthquake.  This is not that far out, since quarries have been known to do that.  But only with extreme horizontal stress.  This leads to a question of the geology of Chicago.

It is well away from my megathrusts, and the granitic basement is probably Archean, but there is a whopping big hole called the Michigan Basin. 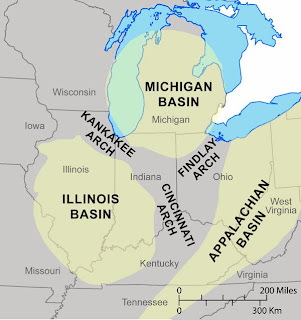 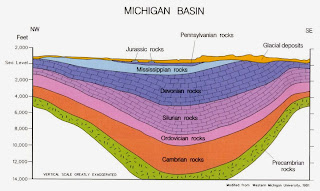 It's very weird to have such a hole.  I can only think that when the first megathrusts came up against the old craton, some micro-plates slide, and pulled apart.  Anyway, the whole point is that this area might not have high horizontal stresses.  I haven't heard it was a problem, not like Niagara.

Also, some regulators are surprised that there was damage.  Again,  they are very slack without instruments.  Who could trust them?  Once again I suspect a bankrupt city, siphoning funds from the blasting to make whoopee.  :)

Update:  Now it's an earthquake again.