I blame the whole carbon hypothesis, and ozone chlorine hypothesis on nasa.  They were fully capable of verifying these things with simple experiments, and they chose not to do it.  In fact, somebody went after the chlorine thing, and nasa killed them.  Can't retract a nobel prize, can we?

These are things that become the modern equivalent of religion.  You can't show them to be wrong, and everybody is happy that no experiments are done.  If you talk to the Manchester Guardian fanatics they will yell that doing such experiments is heresy.  We have no 'Poodles of the oil company heresy' (POOCH) with any money.  :(

I'm a pooch and I can only suggest experiments.  Fortunately, trumpypants has done a random thing and cut off the foolish attempt to read co2 directly in order to enforce the Paris Agreement.  If co2 actually did anything, then they could easily read it indirectly.  In fact, even their 'direct' reading was probably indirect.  If they actually got it going, they would make sure to reinforce the religion.

If you could imagine a world where the physical laws did exist that allowed co2 to be a 'greenhouse gas'.  First of all, there would be no life, it would be Venus.  Earth started as a planet with an atmosphere of nitrogen, methane and co2.  It's a very natural thing.  The greenhouse gas would raise temperatures above 'shirtsleeve', and kill the first attempt at carbon-based life.  Perhaps, we would have silicon-based life.

In that world, there would be natural sources of co2 from volcanic vents.  Weather satellites could easily read that by the opaque fog holding in the infrared radiation.  With our physical laws, on our world, we can't see that.  Finally, if co2 was increasing, this imaginary world would force constant recalibration of the relationship between infrared radiation and actually temperatures on the ground.  Our world doesn't do that.

ps.  this would have been a very costly project, since they would have had to avoid the only physical property of co2 that can be detected.  Namely the infrared notch. 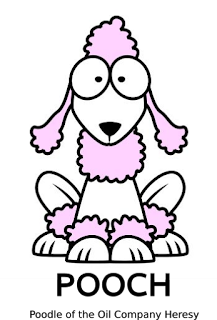