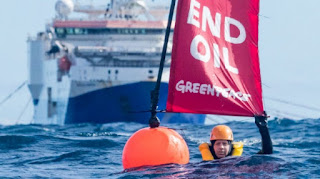 The new method of science is to seize an issue and then fight off any comers, like a game of 'King of the Castle'.  I had a lot of fun with that as a kid, especially on giant snow piles.

The concept that seismic surveys do damage to marine animals is demolished if you look at it with the Scientific Method.  However, it is a great issue for 'Aristotle Science'.  As with gorming, you merely plant your flag in the public's eye, and state "Prove that it doesn't!".  It also works with alien kidnapping.

Oil companies would be better off if they went pro-active, and released all these records in a slightly smudged version, good enough for tectonic studies.  They really need to do this in Oklahoma.  However, as long as they appear 'sinister', the greenies will go after them.