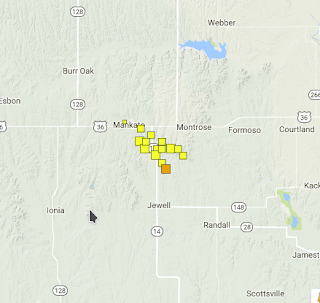 I am very impressed with the Kansas earthquakes.  They are progressing rapidly, with the latest recorded as an m5 in many places.  I expect an M6 next week.  You can see there is massive freshwater injection at the NW tip and the earthquakes are running down the cross-fault to the megathrusts.  As with Azle, Texas, the earthquakes will go down the line and get bigger and bigger.  The location is only the epicentre, which is the initial point of the rupture.  However, you can be sure that the ruptures run back to the source.  This can only be measured with strong-motion accelerometers.

In Texas, they engaged their great conspiracy and quietly dropped the freshwater injection.  They couldn't tell anybody because that would trigger lawsuits.  It is best to handle all this verbally, and then 'forget' everything.  The 'Stupidity Defence' works every time!

I am amazed at how far this is going.  I suppose that nobody lives there and the directivity is going back to the upper state, where nobody lives, as well.  The next m6 might change opinions.