Yeah, as a Canadian I love Arctic ice.  Give me more and more!  In fact, why not extend it all the way to my cottage?  /\  (mountain of sarcasm).

During an El Nino, an enormous amount of heat energy goes into the Arctic, and blasts out into space.  That's my nice summer, we're talking about here!  It's not surprising that ice volume takes a hit (too bad!). 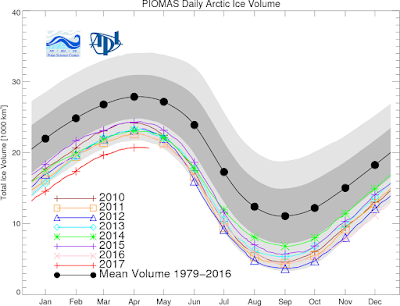 So, in May, the very bottom curve shoots straight into the bulk of the graph, when it should be shooting down like all the other years.  Yech! 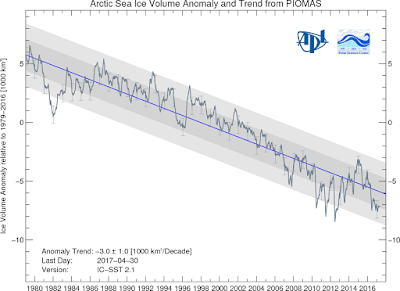 Look what the stinkin' El Nino did to the ice volume.  Last year, the lowest winter rise ever, following a huge drop.  This confirms we had the biggest elni ever.  None of the warmists want to mention that.  If my summer is miserable, then we'll see the biggest rise ever, as we grapple with the loss of heat energy.

Since the warmists have ditched the Scientific Method and have gone back to Aristotle, there is nothing that can 'invalidate' their changing philosophy.  Years ago, hard-core scientists would have derided them for the lack of a mechanism, but they are all dead.  The next few years will be darn cold, and I wonder how they will accommodate this.  They'll say it's a blip, and then they'll throw in the oceans again.  :)

You and I can huddle in the barrel sauna all summer, and watch the Arctic ice volume.