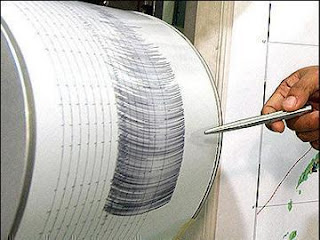 He said the institute worked out scientific principles of possibility of using the steel pipes of the unexploited oil wells as acoustic channel and basing on it principles of establishing seismo-acoustic telemetry station allowing monitoring of the abnormal seismic processes causing earthquake.

Excuse poor English, please.  But we spare no expense to get to the original source of this brilliant idea!  Also note the use of the last seismic pen drum in the world!  Instead of trying to sink a borehole seismometer, these guys have just attached a microphone to the steel pipe of an abandoned deep well.

These wells are really deep!  As such they can pick up all sorts of weird stuff.  As I have said before, each earthquake may lead with various signals -- electrical and acoustic -- but none of it is much use in telling the size and significance.  Still, this is a great cheap idea and should be used elsewhere.  They should also attach some electric monitoring.
Posted by Harold Asmis at 8:40 AM