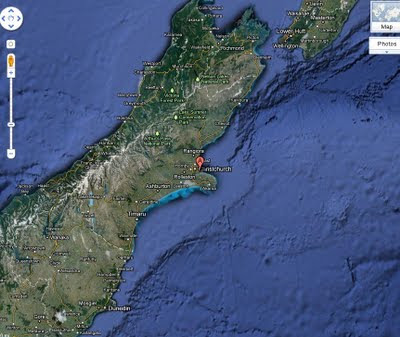 So, Christchurch had another M6.  This is beginning to look more like the 'Decade of Terror', first coined for the Vancouver earthquake.  These are 'terraforming' earthquakes, and can happen all at once, or over an 'episode'.  For Vancouver, it is not known whether it comes all at once as an M9, or as a 'decade of terror', with M8's every year.

People don't realize that the nice scenery of mountains and plains are formed by earthquakes, in those zones where deformation outruns erosion.  In Japan, the lowlands went down, and the highlands went up, and this is always what happens with the larger earthquakes.  The same thing in California.

Looking at NZ, you can see this big pie-shaped lowland around Christchurch.  What the heck is that?  With all the mountains, you would think it would get filled up pretty fast.  :)   No, this is probably a structure forced by the tectonics.  If you had a large earthquake, you would see it go down.   But it doesn't have to be a single event every 300 years, it could be a 'crumble episode' spread over several years (again, every 300 years).

For crumbling, this rock must be totally shattered, with faults to numerous to map.  That is why, although the regional map screams, there is no 'smoking gun' of obvious faults, a la California.  Once a crumble episode starts, it should be obvious that the lowland is going down.  I have no idea what the satellite radar or the GPS is showing for this region, but I suspect that the whole zone will eventually be populated with M6 and 7's, and at the end of it, the existing topography will be sharpened.
Posted by Harold Asmis at 9:09 AM