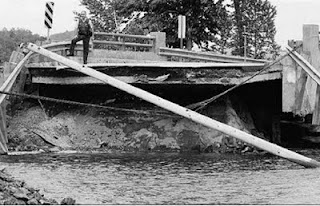 "The earthquake last June is a reminder that moderate earthquakes, rarely up to about magnitude 7, can occur in the Ottawa-St. Lawrence Valley region," says John Clague, who has a research chair in natural hazards at Simon Fraser University.
Examples include the 1663 Charlevoix earthquake (probably a magnitude 7.0), the 1988 magnitude-5.9 Chicoutimi earthquake, and the 1944 magnitude-5.8 Cornwall-Massena earthquake.
"Although not as large as the biggest earthquakes on the west coast, moderate earthquakes in Central Canada can cause considerable damage if their epicentres happen to be close to urban areas," he said.
"Also, there is a large stock of older masonry buildings in Ottawa, Montreal, Quebec City, and other smaller communities in southern Ontario and Quebec that would not fare well during strong earthquake shaking."

Dull article, needs some life.   These people will wring their hands, but nothing gets done here.
Posted by Harold Asmis at 7:40 AM