The Volcano Mitigation and Geological Disaster Agency warned of worse in store as magma pushed towards the surface from depths of 6-8km, compared with a maximum 2km deep when the mountain previously erupted in 2006.


"This is the scenario I dislike the most, because the deepest magma is pushing up now," said the agency's chief, Surono. "The eruptions haven't stopped, the tremors are getting stronger and one big explosion could be the result. I've never seen it act like this. We don't know what to expect."

Now, if they followed the Geofish theory of "Rock Mechanics Controls Everything, Even Volcanoes', then they would know what to expect.  Basically, for Reflux Volcanoes, everything depends on the strength of the surrounding rock forming the 'container'.  When the volcano spews the first time, the pressure drops in the magma chamber.  This drop can only happen by the surrounding rock taking the stress!  Volcanologists don't do math!

So, provided the magma chamber doesn't have a direct tap to the underworld (and I think that only happens when it is first formed')  then everything is happy-happy as long as the rock holds up.  Well, it doesn't!  The same thing happens as in my theory for earthquakes, the rain makes a hash of rock strength, and it slowly fails.  In the picture, there may be just a small failure, or it may be large.  It follows the same fractal law as earthquakes.  If you could map this failure and sinking, you would know things. 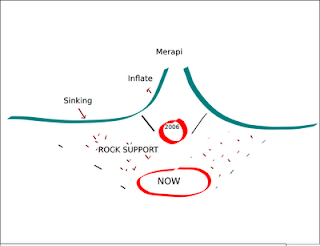