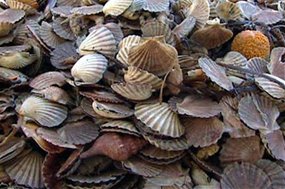 A long time ago, the US Navy conducted some super-powerful sonar tests that were equivalent of exploding huge bombs underwater.  Some whales turned up dead somewhere.

Ever since then, low-power seismic exploration work has been tarred with the same brush, especially if it coincides with some other interest, such as stopping oil companies, or demanding money.  Do you know that some whales use powerful sonic blasts to stun their prey?  Ironic, isn't it?

There has been a lot of seismic work, and it does not have the effects of dynamite fishing.  These clams were grossly over-fished and trying to recover.  Devastated stocks have all sorts of problems coming back, mainly because of the poor genetic pool.  Damn fishermen..
Posted by Harold Asmis at 8:48 PM