Spencer has the fuzziest plot, and it is pretty well stagnant. 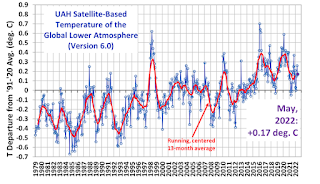 We know the world is cold, and I hope it just stays at this level.  I like it warm in the summer.  In Australia the winter has gone to 'the old guys' who remember previous big snows.  That means we are back to the 70's, there, as well.  At one time, I thought the mechanism of cool cycles was that all the northern heat energy shifted south, but it just all goes away.

We have a convective atmosphere, which means that 'greenhouse gases' are impossible.  noosa just went with that because everybody came off the Venus project.  Greenhouse gases required stratification and it ain't happening here.

I used to do a series of 'Gods of Global Warming', the people who made big money on clange.  You don't hear from them any more.  They are all hiding.  All you see in the media are unknown wannabees.

Since we don't do atmospheric physics, it seems impossible that all the heat energy leaves us.  During the warm cycle, this lack of physics was the main excuse for carbon dioxide.  There was no other explanation for warming, and now there is no explanation for cooling.  Of course, i have an explanation, but that's in the form of a hypothesis, and it needs millions of dollars for measurements.  Not going to happen when all the money is held by leftie group think, and the rightie-tighties are too stupid.