The world is cold 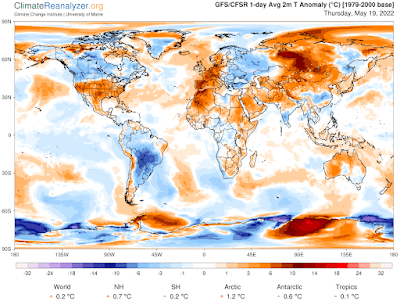 This is a map of the variation from the average, for each location, and date.  The heat wave in India is gone, but the media is still spouting nonsense, like 100 times more likely.  That's pure philosophy, in that it can't be measured to confirm.  It's just hand-waving, which dominates the world these days.

As I have predicted, we are just getting fewer and fewer heat waves, shorter and shorter in duration.  There just isn't the heat energy any more.  A 3-d map of 'media coverage intensity' would show narrow skyscrapers on a few spots.  Maybe Spain is next.

In the Toronto neck of the woods, the big cold blob is being shredded by hot plumes.  That gives us cool and rainy.  The west coast air glacier is bouncing off the Pacific plume.  All our warmth comes from the Gulf of Mexico, and that is unreliable because of the lack of heat energy.  Our weather has always been dominated by the Pacific Ocean, which can have 10 times the energy, but now has none.

No physics will be done to figure out why we go into these cycles.  I always had a faint hope for Alberta, but now they are consuming themselves.  What a waste. 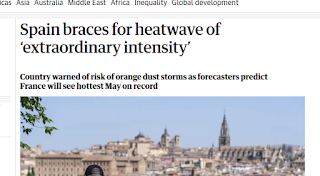 The only change I've noticed is that we get hot, cold, hot, cold now rather than seasonal changes. For example, 222L/m2 of rain in a couple of hours in Nov 2021, followed by the most boring, driest winter you could imagine, then a freezing spring until a few days ago, now boiling and next week back to boring.

I'm betting summer is is going to be like an oven.

Spain will get hot if there are no ocean breezes, or all the plumes come up from Africa. Have fun.