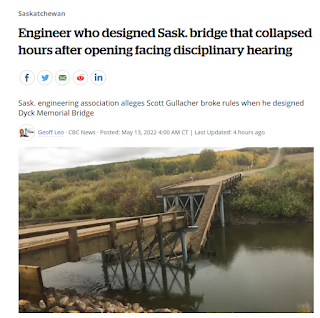 A nice story concerning the amount of brains in the remote country-side.  A real bridge would have cost 1 million, and they would only pay 300K.  Instead, the opted for the same cost, but made out of soggy cardboard.  The rules seem rather loose in Sask, and they don't really have much on the guy, who made a legal bridge, according to their sappy rules.  Screw piles would have been fine, but they have to be driven down to refusal, which might be 50 feet.  Instead, they probably went with deck screws.

And would this stand up to a flood?  Fat chance.  I'm glad it didn't kill anybody.  No engineer stands under the bridge when it first opens.  :)

I estimate this will cost Sask 5 mil in reputation damage.  We can bust our sides laughing at them.