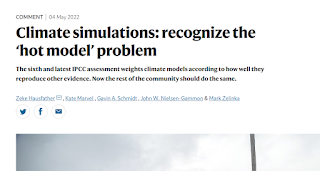 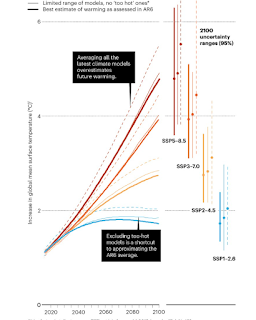 The climate extrapolations are all over the map, and the climateestas are getting worried.  It's a matter of philosophy on what models they pick or how they average them.  They all have the carbon sensitivity injected into them, and that's around 5degC for a carbon dioxide doubling.  Physics tells us that the real number is zero in a convective atmosphere.  This could easily be tested.

These models all grossly overshoot the current world temperatures.  And we experienced their failure this winter.  Was it cold and long?  The models do not include a 'temporary' dip in temperatures.

I was going to title this that climate models are garbage, based on 'garbage in, garbage out'.  but that was too harsh.  Ha!

All the noosa apologists are out in force.  One is accepting a 2c rise and that's still 'horrible'.  As the temperatures go down in our current ice cycle, we shall see more such fun.

ps.  the noosa lady continued to say that 'any' temperature rise is horrible, leaving her room to go to less than 2.  We Canadians wouldn't agree.