Just when you thought it was safe to go into the water, we have another freeze.

We're getting hit by twin blobs.  The one hitting BC, I saw a while ago.  However, the one hitting Toronto, I thought the Gulf air was going to stop it. 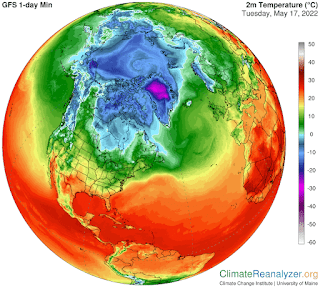 Looks like a big freeze for the north on the long weekend.  Out of the Great Lakes zone, I had mentioned to hold off planting tomatoes until June.  Or get the plastic ready.

Natgas is starting another zoom.  I've turned off my air conditioning.  I had hoped this was over, but Gulf heat is weak and unreliable.  We may have another brutal June.

ps.  pooey. had to turn on the furnace, probably for the next week.