Yeah, yeah, the term means nothing, but since we got these maps, I've never seen this.  That's like 5 years. 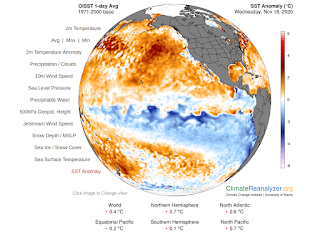 That's the temp anomaly map, which is only a degree or two.  Nevertheless, it is a powerful thing.  On a full El Nino reversal, the map is red the other way, as warm water reverses back over the Pacific.

This has caused really weird Pacific tropical plumes.  I have no idea what will happen, but we had some nice warm weather because the plumes totally stopped and allowed warm Gulf air to hit us.  The Pacific plumes have stopped normal movement.  I expect them to eventually hit the Yukon and come at us with a cold clipper.  But who knows?  Last year we had a very warm weird halvsie El Nino, and now it's a massive La Nina.
For some reason, the Arctic freeze-up has gone weird as well. 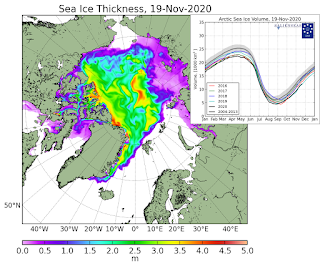 That change in slope was associated with a strong Pacific current last year, but this year there isn't one.  I have to wait for the patterns to settle down, right now, everything is chaotic.  Enjoy  a depressive Christmas!  Get the snowblower working.