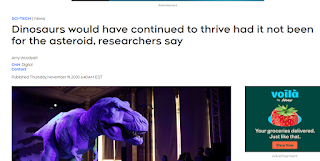 This is interesting.  If you follow physics, then the world was turning over the temperature, because the tectonic plates were separating.  That means the dinos were dying out, and mammals were taking over.  The meteor was irrelevant.

However, I read this article that we would still have dinos if the meteor hadn't impacted.  My opinion is that this is total garbage.  It took a while, but I found the right quote in the article.

"The main point of what we are saying is that we don't really have enough data to know either way what would have happened to the dinosaurs," Bonsor said. "Generally in the fossil record there is a bias towards a lack of data, and to interpret those gaps in the fossil record as an artificial decline in diversification rates isn't what we should be doing.

In short, it means that they don't have a clue, but they want to make a headline.  Flip a coin.  I'll still go with it being too cold for dinos.  Warm, fuzzy mammals won the election, trumpies lost.  :)

How do you like that. Any Physics to this.

The pcr tests don't mean much when it comes to quarantine. I'm objecting to the way they use the total numbers to call a lockdown, etc. The tests are probably 90% but limited by the fact that it takes 5 days to produce a positive, if you do. The whole thing is badly handled according to physics, and that's why I'm calling it a Grand Stupidity. Although the anti-maskers are nuts, you can see that the doctors don't know sh@t.

ps. I'm generally giving up on the covid follies. I had it already. I'm buying everything on ammie, and we have a freezer full of meat.