The Jet Stream will kill us all 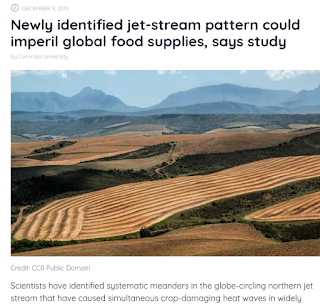 I have decided that I am no longer adding any physics to these things.  Who cares?

The jet stream is a fast-moving river of air that continuously circles the northern hemisphere from west to east.

I'm not going to argue with that!  A balloon placed in the Jet Stream over Canada will eventually find it's way back to Canada.  That experiment has been done hundreds of times.....  (nope).

We live in a world where we can just utter statements, and they will be picked up all over the world.  In actuality, it is the statement that circles the world.  Who needs experiments?

ps.  ending this with real physics.  In the past 5 days, a spiral Pacific plume brought up Gulf air, while a high plume dug out Arctic air.  It will all come to hit us tomorrow.

pps.  The Jet Stream is a boundary effect, like a shadow.  It results from the meeting of warm and cold air masses, just like your shadow is an effect of your body meeting sunlight.  You don't expect your shadow to pick up a rock and hit you, and the Jet Stream can't actually move air around.  Those tropical plumes are the real 'rivers of air', and they move a lot of heat energy.