All the early lab experiments on ozone are gone

Wow.  I went back to look at the nasa experiments in an atmospheric lab.  They found that all the ozone reaction rate assumptions were off by a factor of 10.  When nasa went 'all in' on the ozone layer, they eliminated these results.  I had found a few in various papers.  Now the clean-up is complete.  I only found this, and some others.

Impact of recent Laboratory Measurements of the Absorption Cross Section of ClOOCl on our Understanding of polar Ozone Chemistry: Part I, Theory

Uncertainties of the photolysis cross sections of ClOOCl have long been a limiting factor in our theoretical understanding of the rate of polar stratospheric ozone losses. Previous work suggested that values slightly larger than current recommendations, which are based on laboratory measurements, result in improved agreement between model calculations of polar stratospheric ozone loss rates and observations while at the same time also leading to improved agreement between observations of the diurnal variation of ClO and model calculations of this species. But new laboratory work on the cross sections of ClOOCl suggest that its photolysis under polar stratospheric winter/spring conditions is nearly an order of magnitude slower than what would be required to explain the observations of ozone loss and ClO in the atmosphere and a factor of six slower than a value based on the current recommendations. We show the impact of these new results on our understanding of polar ozone chemistry.

We will discuss potential new chemistry that would lead to improved agreement between calculations of ozone loss and ClO diurnal variations with in-situ observations in the stratosphere.
Poster Session 7, Stratospheric Chemistry and Ozone Recovery Posters
Thursday, 23 August 2007, 3:30 PM-5:30 PM, Holladay

It will gone soon.

This still exists, but all the links are gone.

This is why nasa will never do physics to test their assumptions.  They will send up experiments that can only confirm things on top of the assumptions.  Oh well, my super-expensive new air conditioner is working now, but nasa cost me thousands of dollars.  :)

ps.  this is the graph that 'shows' nasa was right. 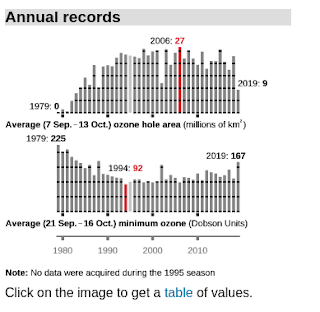 The record is very short.  It shows that ozone levels go up and down.  Wouldn't some physics be good here?