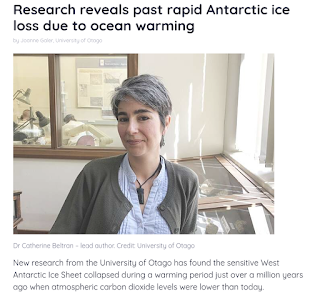 "Our work shows that very mild ocean warming, like what is happening right now, was the precursor of past ice retreat and that we should really worry about it today," lead author Dr. Catherine Beltran says.

The seven-year study led by Dr. Beltran of Otago's Department of Marine Science and Department of Geology, is the first ever study that uses molecular paleo-temperature tools to successfully reconstruct sea surface temperatures (SSTs) for the Southern Ocean surrounding Antarctic for this geological period when atmospheric CO2 was low.

Good thing there is no warming in the Antarctic. 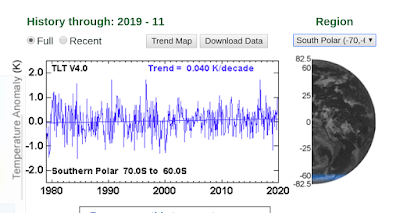 It's just 'imaginary' warming.  But the thing here that everybody misses is that there was a huge interglacial warming period with no carbon.  Would that ring any bells?  Nope, not here, it confirms that we will all die.

ps.  it would be great to know what was happening in the north at exactly the same time.  I suspect the north was in a major ice advance, so the sea level would have been down at this time.  I don't think there is enough heat to warm up the whole world, so it just flip-flops.

pps.  if you wonder why a New Zealand university is going through so many hoops to defend 'carbon warming' while presenting results that utterly destroy it, then....