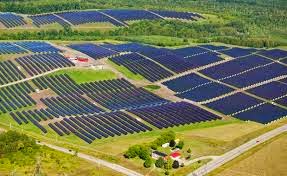 Sometimes I don't have to take pictures, since I can always steal one.  I took the north route to the cottage over by Beaverton and ran into two of these monstrosities being built.  That annoyed me more than the two times I had to stop for turkeys.  :)

These are fine for California deserts, but now you have to subtract the carbon value of the farm land, and the fact that you aren't getting any sun.  These things will never pay back the carbon it took to build them.

As I zoomed by I was imagining the 10 foot snow drifts coming with the end of our binomial temperature blurp.  I suppose you could feed in the cheap electricity to melt the snow off the panels.  :)  Then why not trickle in a bit and sell it at ten times the cost?

Related to the Texas Conspiracy, I was thinking that in Canada we have as many conspiracies, but nobody ever mentions them -- too embarrassing.
Posted by Harold Asmis at 9:01 AM