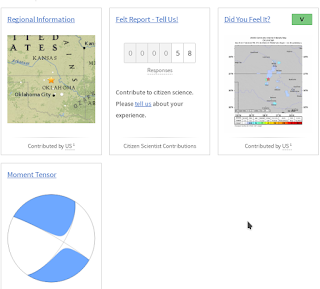 An 'official' m4 that I'm calling an m5 because of severe directivity.  That is, the seismometers in the direction of the strike-slip pulse recorded it as a 5.  I'm always going with this higher number because that is what will count when there are big ones.  For example, an m6 can take down buildings that are in the pulse zone, whereas something much bigger is required to take down buildings out of the pulse.  A pulse is easily a factor of 2 or 4 with the PGV.


At this new rate, we should be getting an m5 once a week.  That means at least two to three m6's for the season.  An m7 might still take another season or two.  It will hilarious to see trumpy and wife coming to the scene of devastation and looking sympathetic.  He'll say "I'm the president, and you're not."  :)

ps.  I am expecting a big increase with the seismic energy rate due to the big Texas play.  Normally, just the NE gas frack waste has been coming in.  Although OK has been limiting injection volumes, they are merely pricing out the local sludge, and injecting more high-grade.
Posted by Harold Asmis at 3:14 PM