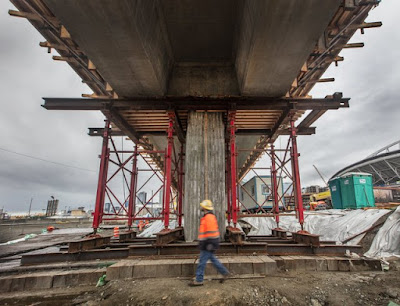 We've now shown that base isolation is garbage, but people still love 'soft, flexible' energy absorbers.  This all comes from shake table non-physics.  I'm not a denier of this belief, but once again I say there is no physics.

As with base isolation, the hope is that a little bit of memory metal will take up all the energy, and the bridge will be good to go.  At least I hope they instrument it.  As with New Zealand, they put so much money in this, that they cheap out on the foundation, and instrumentation.  So, although we see it fail, we don't really know why.

The failures will just have to keep piling up until we can laugh at the engineers.  However, that will be a heck of a pile if they don't instrument anything.

**note** for future generations.  Seismic engineers scale everything by peak acceleration, and that's how they run their shake tables.  PGA doesn't vary from site to site, rock to soil.  A 0.3 g earthquake is that everywhere.  So if they can make a structure that goes from 0.3 g to 0.6 g, it's a great thing.  Unfortunately, this has no physics.  Damage scales with imposed shear strain, which is indicated by peak ground velocity, PGV.  And that varies by a factor 10 to 100, site to site, earthquake to earthquake of the same magnitude.  All this fancy stuff only gives you a factor of 2 in PGV, and that's buried in the noise, totally worthless.
Posted by Harold Asmis at 9:44 AM