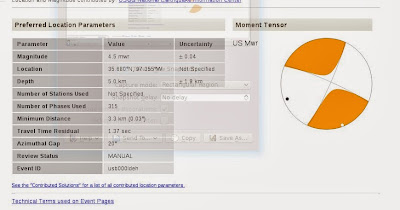 Oh well, I am human after all.  I was so certain that a big thrust would occur first, and then a smaller strike-slip three days later, a la Arkansas.  Looks like the smaller shear quake came first.  You can also see this in the first aftershock. 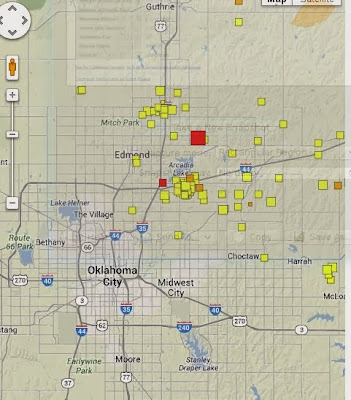 Straight down the shear fault to the city.  Perhaps we are in for a much bigger thrust, or that thrust may be skipped altogether.  We could jump right to second phase.  In a week or two, expect an M5 thrust.  The thrusts are interesting in that they produce a 'hammer strike' right above them.  This shear quake produces less PGV, but if they do a shake-map, you'll see an alignment to the NE.  That is common for eastern earthquakes, and it means the propagation also went in that direction.  Don't forget that the fault length for an M4.5 is probably less than 100 m.