Oklahoma and Texas back to back M2.7 earthquakes

I've never seen anything so twinned. 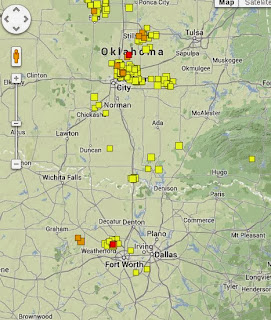 They are on different megathrusts, so we don't have any physical connection.  It's more like the identical mechanisms are working.  OK is again in that middle area, away from most action.  Since there are now two earthquakes there, I am suspecting a new injection well.  After all, it is right on the 'bonanza' megathrust.

As for Texas, it is 'downstream' on a NW transform fault, out from the megathrust.  I expect that the plume will get more into the structure near Dallas.

All of this could be solved if they would just put some money into reprocessing the tons of vibroseis data in the region.
Posted by Harold Asmis at 7:12 AM