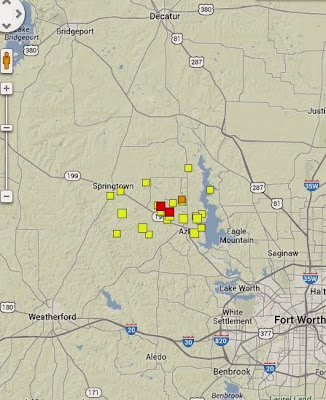 Looks like Azle isn't as mature as Oklahoma in terms of the 'New Madrid Growth Process'.  But the good news is the new seismometers are pinpointing the NW flow pipe.  Somewhere along that line is the monster injection well.  I don't think this system is capable of the M4.5's and up.  If we see a NE trend, then it is good to go.  :)

After OK hits the M5's they may have the will to put some money into this.  Normally, they would just stop the injection, but they are running out of room.  It reminds me of when they banned smoking in the cubicles, then everybody would crowd into the lounges.  They became a smoke hazard, then they all went to a special vented room.  Soon, no fan could keep up, and they all crowded outside by the door.  Nobody could get into the building without smoke damage, so they pushed them farther away.  This the same with injection.  Soon they will go somewhere else with bigger and bigger wells into the Precambrian resulting in bigger earthquakes.

There is nowhere safe to inject those exponentially increasing volumes.  If they go to propane, it will be many times more expensive, and there goes the whole ball of wax.
Posted by Harold Asmis at 8:41 AM