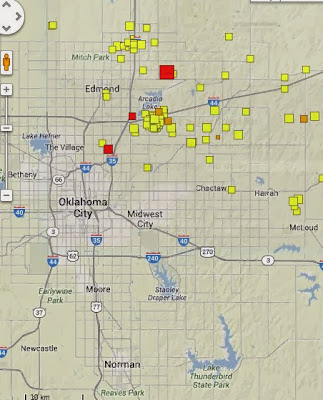 It always requires a thrust to activate the shear, but in this case the many small earthquakes on the thrust produced enough strain to release the shear.  Then the big shear quake has liberated enough rock to make a large thrust earthquake inevitable.

All the regional injection sites are celebrating their Christmas bonus, since this is a large enough quake to knock down the pressures and increase the volumes.  This is the fundamental mechanism for all the large earthquake zones in the East.  It is how New Madrid grew.

Like the Monty Python Black Knight, OK shouts 'Fight On!'.  I admire their spunk!  Unlike those weenies in Arkansas and Ohio, this will prove the operative mechanism.  We should get up to an M6 before they stop injection, and the residual could push us to M7.  Then all the trucks will move to Texas and we can do it again!

Is that all you got?