My favourite site has not had an update for 2 weeks! This is the exciting time when they finally break into the Whirlpool Sandstone, and attempt to advance with half the cutter in the hard stuff, and half in the Queenston Shale. I'd never do it, but they are desperate!

Look at this picture of their daily routine before this wonderful thing will happen. 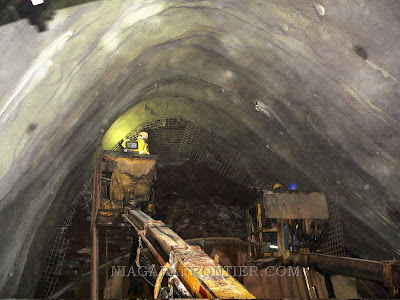 All that broken rock is resting on the shield. They have to stop moving for this work.

But the real reason that I write this is that I fear for the web site. This is not politically approved and has been a constant thorn in the paws of complicity. Maybe they've silenced it? In that case I accuse them of cover-up! There is no greater crime in political space! They can be incompetent boobs, with this politically-designed project taking 3 times as long, and 3 times as expensive. That's just water off their oily backs!

But accuse them of cover-up, and they scramble like chickens. The denials spray out like the manure at an American-run Mexican pig farm! Nothing gets them more upset. And the concept is easily grasped by opposition politicians!

But when political people clam up, I never give them a break. I just go into my own fantasy land, since they're giving me nothing. This time, I shall assume that things did not go well as they entered the Whirlpool. The machine is skidding along the bottom, and cannot penetrate. Under the high stresses, the bottom of the sandstone is bursting into the tunnel.

Now, spread that around kiddies, and see the birdies shake out from the trees!
Posted by Harold Asmis at 12:36 PM

I've enjoyed all your posts about the Niagara Tunnel project. Thanks for breaking it down into layman's terms. I think even those not familiar with rock mechanics can follow your great diagrams. I compiled a list of your posts on the project and put it on my site. Hopefully you'll get some traffic (and clicks) out of it. Regards, --Randy

I was just thinking about the slant on that overbreak. There's nothing in the rock fabric to do that. It must be a pure stress thing, with perhaps an effect of hitting a polarized stress field at an oblique angle. This would be great for a thesis, if they knew anything about the stress, or the rock properties....