Both Japan and Ecuador Earthquakes likely to go on 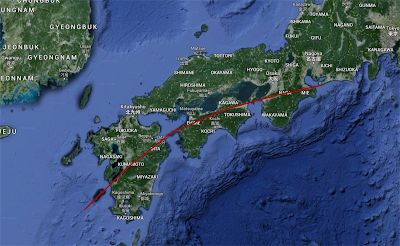 There it is.  A huge strike-slip fault that it far more deadly than the subduction zone.  That's because the subduction zone has a huge kink in it and it might keep it to 8's only.  Subduction 8's only produce 10 cm/s and no tsunami, the strike-slip is shallow and will produce 50 cm/s in the near-field.   And you never know when subduction zones are going to blow.  As well, offshore, it looks kind of mucky, not like that beautiful smooth trench in northern Japan.

The bad thing about huge transform faults like this one and the San Andreas is that they tend to march a bit before the stress shadow takes over.  Each fault slip puts a lot of strain on the next section.  Might be in 20 years, but they should really get the screw piles out for that soft ground.

We know from Chile that once you get going on the subduction zones you are going get quite a few before it settles down.  That little earthquake off Ecuador was just a foreshock.  Again, maybe years, but get out the tsunami sirens and the screw piles.  As well, a little more steel and use real concrete.  Like I said, Guatemala has a good system for hovels, as long as they limit it to 2 stories.

In between Ecuador and Chile lies Lima, Peru.  When I went through it 30 years ago I thought 'Whew!".  That's my choice for the next 30,000 dead disaster.  They all like the heavy clay tile roofs there.