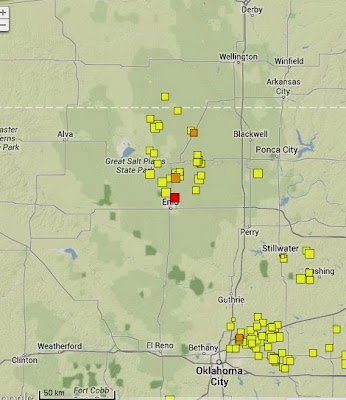 I don't have a great reason to report 'Yet Another Earthquake', but this one seems to be stretching south.  Who knows where the actual injection point is?  Like the Virginia earthquake and the dam, sometimes these things stretch until they find a major fault.  There's a bit of a linear there, just south, which would be one of the NW cross-faults.  I don't expect much since the city injection hasn't triggered it, but you never know.  :)

Just a reminder, that everything I say is an original thought, without a speck of 'conventional' support.  Some crotchety person mentioned this in a comment that I didn't publish.  But don't forget that all these earthquakes take place in the Precambrian which is totally unstudied in these parts.  It is totally unstudied in Ontario, as well, beneath the Bruce Black Hole, except in a few obscure journal articles, which I have mentioned.  As well, we did a lot of geophysics in the lakes which is also buried.  Perhaps that is why I semi-wish for one heck of an earthquake down here.  Very cringe-worthy.  :)
Posted by Harold Asmis at 7:55 AM