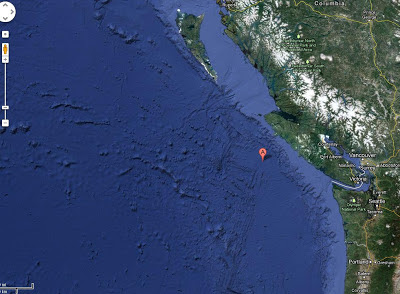 You see that beautiful straight line up by the island?  That's what ripped for the last earthquake.  Probably the largest that section can hold, thus it reinforced the topography.  That's a general rule for everything, the largest earthquake is the one doing the landscaping, all the small earthquakes build up to that.

That straight line points directly at this earthquake, which is in a dog's breakfast of old spreading ridges.  You'll notice that the subduction zone under Vancouver is very curved and ill-defined, not at all like Japan or Guatemala.  Thus, I always have my doubts that we'll see a big one rip, perhaps a bunch of smaller M8s?

The ocean crust here is younger and quite strong, as seen by the large number of aftershocks in the crust from that last one.  Thus I have no doubt that a stress field could reach the site of this earthquake.  Anyway, this size is small beans to the region, and probably means nothing.