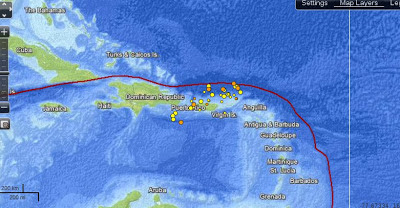 I'm indulging in pure wild speculation here, which I can do, since nobody listens to me.  All the other people have to keep their mouths shut.  This seismic cluster started as a very small spot above the Virgin Islands.  It has always produced M3's.  As such I have said that it was interesting, but meant nothing.

Now it spreads, and I no longer believe it is caused by fluid movement.  It is a real 'slow' earthquake, or stress adjustment.  Most likely it still means nothing, but I can go wild here.  As we know the strike-slip fault under Haiti activates the upper fault, and moves on to Jamaica.  (a historical trend of one!).  This has led me to dream that the whole upper fault 'marches' like other such faults, in that a big earthquake on one section eventually causes the next to fail (Right Istanbul?).

This cluster has spread from the upper fault (strike-slip or subduction, who knows?), and goes right up to the lower one.  The only thing missing is that the size of the earthquakes should be increasing, which they aren't.  If that happens, then we can expect a major earthquake.  If the whole thing just dies down, then it's back to sleep for everyone!