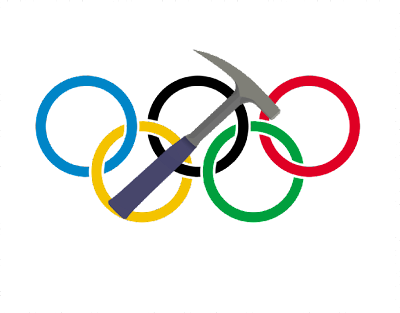 Four students will be finally chosen from among the training camp participants, who will represent India at the fourth International Earth Science Olympiad (IESO) to be held at Yogyakarta, Indonesia from September 19 to September 28, 2010.

Olympiums drink an appropriate amount of beer and attempt to knock down a beer coaster house at 1m, by belching. No fair trying to use other orifices!

Please be advised that your use of the rings logo is an infringement on the rights of the International Olympic organizing committee and unless you either pay us a $10 million dollar fee to licence it's use for display or cease and desist from displaying it strong legal action will be taken.

Geez, does that include our torch as well, which has a lump of coal instead of a flame?