The efficiency of the Earth as a heat radiator - Part 1 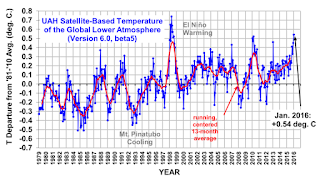 This is the inspiration.
I've done this before, but I'll do it again.  This is about the physics of the earth, or geophysics, which our warmists never want to think about.  Not that I'm saying they are wrong, but they like to push out all the variables and uncertainties.  I'll never 'deny' what they believe in.

If we look at the Earth for last billion years or so that we have a good fossil record, we have a problem with the 'CO2 is Everything' approach.  Every few hundred million years or so, we go through cycles of major hot and cold.  This times exactly with our 'Wilson Cycles' of plate tectonics.  In other words, our continents keep spreading out and then crunching back together.  If you look at one of the animations, it's just a big accordion.  :)

The last big 'hot time' was our famous dinosaur Mesozoic.  There were plenty of mammals just before in the Permian, but then they left and let dinos take over.  Also, plenty of big volcanoes and meteor impacts during that time.  They did nothing.  Now we have entered our modern era of plastic litter, but more importantly, we are going into another 'Snowball Earth'.  There were plenty of these before.

Surely we can't expect a giant CO2 tap turning on and off for these episodes.  And there were no steam engines in those days.  I'm sorry, but carbon is out as the fundamental cause.  The fossils show that water was still water through those cycles.

The cause of the big cycles is the motion of the plates.  Somehow when they are all squashed together, we get really warm, and when they are evenly apart, the whole Earth freezes.  Find that in any geology book, I dare you!  :)  So the Billion Year Old man has two outfits, bathing suit and winter coat.

There's nobody else in the world looking at this (Stupid Seismic Early Warning is much more fun), but I like to dig into the physics for this.  Since I have no money, it's all in the form of Einstein thought experiments, which are really cheap!