The efficiency of the Earth as a heat radiator - Part 2 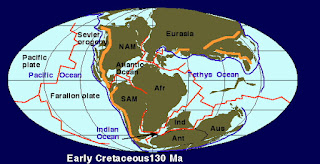 These are the happy plates at maximum bunching.  From a physics point of view, what does this do the Earth?  Can we think it was nothing?  Nobody has really looked at this, so the world 'consensus' is that nothing much was going on.

I, however, think differently, and always have.  That is why I am a nut, and proud to be so.  Nobody has made a buck listening to me, so nobody shall.  :)  Digression:  I've had a grouchy teacher at super-rich private school, tell me "Things were different in the old days when we had all the old money.  They were like Trudeau, feeling that they had a destiny to change the world, to make up for the fact that they were rich.  Now, we get the kids of the 'new money' whose parents spend every minute of the day chasing money, and they throw their kids at us.  There is an effect."  These people aren't going to listen to me!  :)

But I digress.  We must realize that our Earth is a giant heat radiator.  If you were in outer space, you'd feel the warm glow, like a fire, and could warm your hands.  :)  Not really.

That warm glow is the most important thing keeping us alive.  We're like a very dim star, radiating in infra-red and microwaves.  The Earth has two sources of heat it must shed, the heating from the Sun and the heating from our central nuclear reactor.  Again, like the Sun, but with nuclear fission instead of fusion, or maybe just unaccelerated nuclear decay, if you want to be boring.  :(

The Sun is always the same, mostly.  At least it doesn't turn up and down on a 300 year cycle, in sync with our plates.  The Sun doesn't give a hoot about us.  :)

That leaves our nuclear heat, insulation in the atmosphere, movement of heat by the oceans, and the insulation of the continental plates.  Hint:  our nuclear reactor is steady.  :)

-to be continued.
Posted by Harold Asmis at 4:30 PM