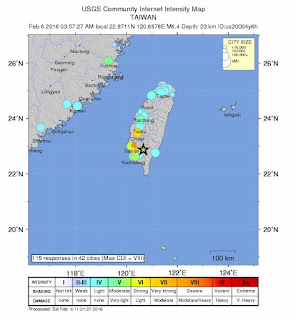 M6.4, very small in this region, but location makes the difference. 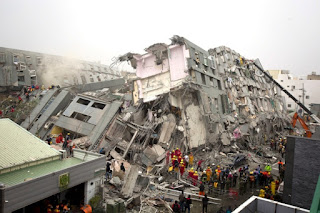 In general, nobody builds better than Taiwan, but this has spaghetti rebar, and weak concrete.  We'll have to see what the strong motion was, especially the PGV.  They know how to record strong motion, unlike anybody else.

For this type of damage, we need a PGV over 1 m/s and this building is on soft soil.  We will learn a lot from this earthquake, mainly how useless 'early warning' is.  Most of all, this is not a 'plate margin' earthquake.  This is an Oklahoma and Toronto earthquake.  It all depends on where the 'hammer' of the thrust is.  Looking at the data, these towns were right in the hammer zone.

ps.  In any picture of an earthquake disaster, look at the buildings with no damage.

Wow, thank goodness no major aftershocks, which we would not expect from a clean thrust.

pps.  Turns that building was a criminal effort with tin cans used as filler.  I wonder if the PGV even hit 50, probably 20-30 cm/s.  I'm amazed such criminality could work in Taiwan.

pppps: Less than 10 seconds early warning while people were asleep.  Let's call that a fail, shall we?