How close were we to a new nuclear plant?

They won't come out and say by how much we missed the boat. If they had said they were willing to pay 24 bills and the price came to 26 bills, then we would know that Ottawa only had to cough up 2 measly bills. That would be nothing to get rid of AECL!

And I don't understand their pricing. Was that 4 units at 26 bills? That's only about 6 bill per pop, which is cheap! Of course I think the total cost would be astronomical, the way they were going about it.

So, let's say the economy picks up, and we're all going with electric cars to get to the beautiful, hot and sunny cottage (come back to me, Al Gore!!). The existing nuclear stations cough up blood on their steam generators, which is expected any time now.

What do we do? Are the Chinese paying umpteen billion per nuclear plant? NO! We can have a decent cost-effective nuclear plant, if we use the Westinghouse design for Wesleyville. WESTINGHOUSE FOR WESLEYVILLE, YEAH!
If the Port Hope Backwater Boys want to make a stink about it, then we dump all our sweaty underwear on them, because we are going to sweat, and not go anywhere. They can also pay for our extra carbon, and fill the place with windmills. :) Heck, every square foot in Ontario will look like jet-engine Wolfe Island. Let's hope the wind climate doesn't change! 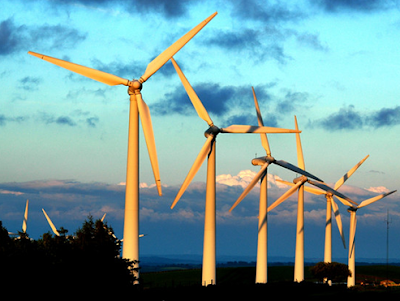 Of course, if they are allowed to clog up progress, then everybody should be allowed, and the whole province can go the way of Japan.

Putting all this funnin' aside, Ontario needs to make a place for it in the world. There are horrible consequences to allowing it to become a backwater. If we become generally poorer, it's the bottom that falls out. Right now, I see us heading this way, but we've been known to turn when we see the cliff. Can't see any turning yet, but I have faith.
Posted by Harold Asmis at 6:45 PM