This is a new thought that came to me in my creative haze, that may or may not be something that rhymes with Hannabis. 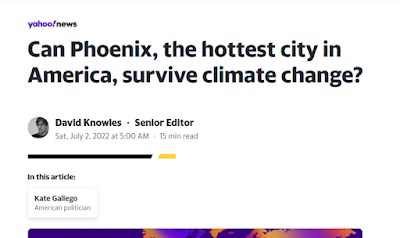 A heatwave comes when there is a high sun (summer) and no ocean breezes.  The air is essentially stagnant.  Those conditions have occurred since the beginning of time  We've always had big heatwaves in the summer.  The severity is in the length.  We can always avoid the heat in the basement for a day, but then it heats up.  Deserts are fine with big buildings made of stone, because of cool nights.

Now the big thing in the media is that heat waves will get hotter to point of killing everything.

How long are these heatwaves lasting? 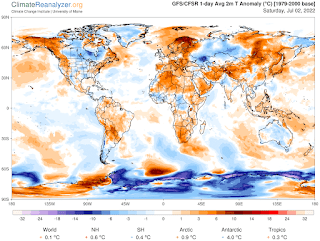 The Japan heatwave is a tiny little weak smudge.  Won't be here tomorrow, just like the North Pole heatwave and the Spanish heatwave.  All of these things are here and gone.

In the middle of the Pacific ocean, I have estimated the the maximum temperature is around 30C.  That's because after that, the atmosphere becomes violently convective, spawning out plumes and storms.  That's what is happening to Japan right now.  Look out for the big storm!

So, their heatwave will be over soon with a monster storm, but we can then blame that on climate change.  For Phoenix, we have dry air, clear convection as the limiter, and the cool nights also allow the daily peaks to rise.  Phoenix won't get hotter, they have standard desert weather, which has a peak.

This is good physics, that could be done by a medium university without being criminalized.