I hate this name for the faulting mechanism.  It implies that it is 'every day', which it isn't.  This is the type of faulting that is plaguing Italy right now. 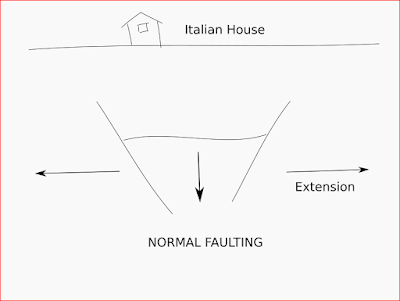 'Normally' I have nothing to do with this type of faulting.  It is the whimpiest for the PGV to magnitude ratio, and is usually only found in areas undergoing extension, like Italy.  Those Apennines were actually formed in compression, but the tectonics has shifted so that they are pulling apart.  Had they any construction other than Maffie concrete, or piles of rocks, nobody would be paying these earthquakes any attention.  They are only producing a PGV of 20 cm/s.

I'm only interested now, because something weird and wonderful is happening Oklahoma.  The thrust faults are being miserable, probably at too steep an angle.  'Normally' a thrust fault is the only thing that can happen with high horizontal stresses, but if they are not cooperating, then we get extension perpendicular to the horizontal stresses.  So, in the diagram, the high stresses are pointing into the page.

This has led to some very large earthquakes being underrated in OK.  The directivity is pointed into the Earth, and makes distant seismometers jump, but local ones say 'meh'.  We've had some that are well over m6.  But it doesn't matter if nobody feels them.  :(